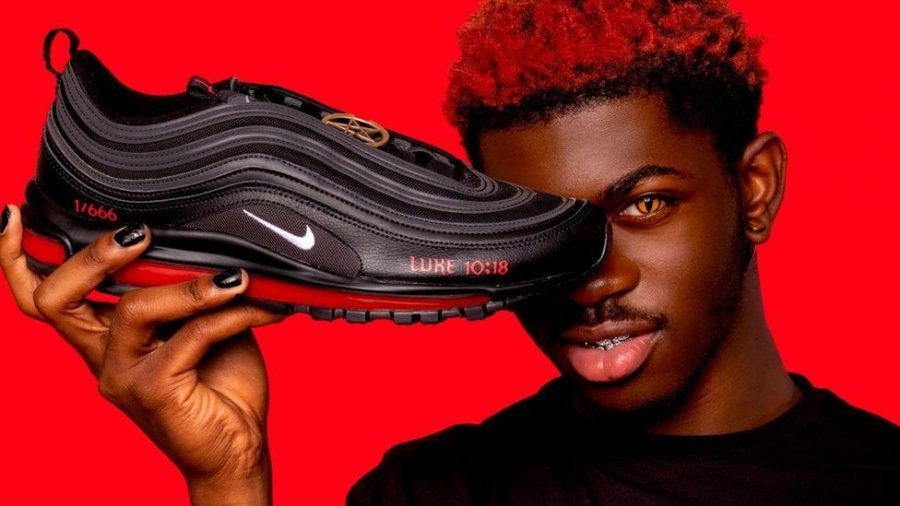 Editors note: Since this story was published MSCHF has withdrawn the shoe completely.

Rapper and singer Lil Nas X has recently released a controversial shoe called “Satan shoes.” In the pair of shoes were a drop of human blood, a pentagram pendant, and a Bible passage. Lil Nas collaborated with MSCHF, an American art collective to make these shoes.

Although the shoes have the Nike logo on them, Nike did not have anything to do with the production of the shoes. Lil Nas had custom-made 666 pairs of shoes and was selling them at the price of $1,018, a reference to the Bible passage Luke 10:18. A MSCHF spokesperson said the blood had been provided by members of the art collective.

“I think the drop of human blood thing is unsanitary and weird,” said junior Sin Za Thoi. “I just don’t get why he went that far with his shoes.”

The group also confirmed to CNN that Nike was not involved in this in any capacity.

After the shoes were released, many debates sparked over the internet, and some thought that his new music video and his shoes were spreading hate against religion.

“The shoes don’t offend me, I’m not very religious and think if people want them then get them, if you don’t like them then don’t get them,” said sophomore Parker Limke. “Some people might be offended by them, which I can understand, but I don’t think his goal was to offend people.”

Later after the shoes had been released, Nike had settled with MSCHF on the shoes. Many thought that Nike was supporting the shoes when in reality they were not.

MSCHF will offer to repurchase the customized sneakers from consumers, resolving a lawsuit filed by Nick After the footwear created a social media outrage.

“I think the shoe is spreading hate in a way and that is also why I think that Nike filed a lawsuit against them,” said Thoi. “I think It’s dividing religious and non-religious people away from each other.”

The shoes were never about making money according to MSCHF. MSCHF made these shoes to make a point about how crazy collaboration culture has become, nothing to do with collaborating with Satan.